In 2013, a group of researchers spearheaded by the University of the Philippines- School of Urban Planning conducted the search for a locality in the Philippines that possesses a significant range of geological heritage and can thus qualify to be a part of the Global Geopark Network of the United Nations Educational, Scientific, and Cultural Organization (UNESCO). After the following years of undertaking several comparative investigations and consultations with communities, local and national stakeholders, Bohol Island was deemed to have the best qualifications for a UNESCO Global Geopark (UGGp).

The island province’s breathtaking landscape is a testament to its geologic history as evidenced from its varied landforms and structural features. Covered mostly by limestone, majestic karst landforms like the world-famous Chocolate Hills and the Hinagdanan Cave are some of the main prides of the province. It also boasts of highly diverse flora and fauna due to its dynamic geologic and tectonic history. Its traditions and culture are also proof of how Boholanos adapted to its natural environment as seen from its only living intangible heritage, the Eskaya Tribe in Taytay, Duero.

In 2017, the province formed an ad hoc group designated to carry out the activities and requirements for the completion of the necessary documents for submission to the UNESCO. A provincial executive order was passed for the creation of the Technical Working Group (TWG) for the Bohol Island Aspiring Geopark and the provision for funds to finance local activities. Following several province-wide workshops, forums and assessments, the designated TWG is expanded to create the multi-sectoral entity Bohol Island Geopark Management Council.

In November 2018, Bohol Island Aspiring Geopark finally submitted its comprehensive application dossier to UNESCO which was accepted by the UGGp Secretariat and was considered for evaluation. In July 2019, Kristin Rangnes and Alessia Amorfini, two evaluators assigned by the Global Geoparks Bureau came to Bohol for a field mission to assess the international significance of its geological heritage and the readiness of Bohol to become a UNESCO Global Geopark.

In 2020, the UNESCO Executive Board decided to defer the inscription of Bohol along with some other aspiring Global Geoparks around the world to allow for some improvements. The decision has not deterred the team; instead it motivated them to work harder to deserve the designation. Currently the team has been reaching out to different stakeholders, conducting series of lectures and trainings, and improving management plans, among other things, to fulfil all the recommendations of UNESCO. With great enthusiasm and determination of the Boholanos and the support of different stakeholders, Bohol Island will surely be recognized in due time as a UNESCO Global Geopark, the first one in the Philippines.

WHAT IS A UNESCO GLOBAL GEOPARK?

“UNESCO Global Geoparks are single, unified geographical areas where sites and landscapes of international geological significance are managed with a holistic concept of protection, education and sustainable development. A UNESCO Global Geopark uses its geological heritage, in connection with all other aspects of the area’s natural and cultural heritage, to enhance awareness and understanding of key issues facing society, such as using our earth’s resources sustainably, mitigating the effects of climate change and reducing natural disasters-related risks.” 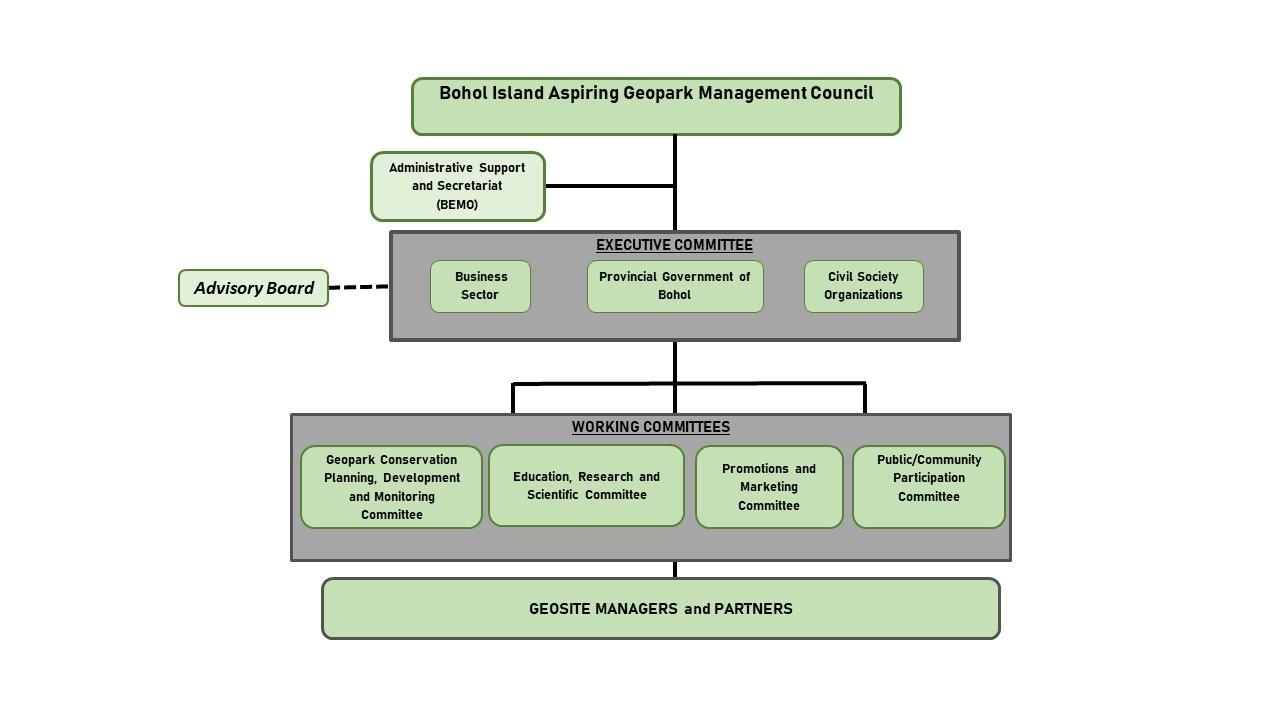